Although the historic city of Pamplona is chockablock with art, culture, music, and delicious food and wine any time of year, you can’t quite call yourself a serious traveler if you haven’t yet made the pilgrimage to this beautiful part of Spain for the legendary San Fermín Festival and you haven’t witnessed first hand the running of the bulls in Estafeta street. You’re no doubt familiar with the multi-day festival’s signature event, the running of the bulls, but with nine days of near-constant partying and cultural traditions, there’s much more to San Fermín than first meets the eye.

The famous American writer and modernist Ernest Hemingway, popularized San Fermín in the public consciousness when he set his acclaimed novel, The Sun Also Rises, in Pamplona during the the week of the festival. Hemingway was so moved by his first San Fermín experience in the 1920s that he returned time and time again until his death, decades later.

San Fermin takes place over nine days in July every year (the 6th through the 14th) and for one week locals and visitors are dressed in the traditional white trousers and shirts with red neckerchiefs tied at the front. A 200,000 inhabitants city grows up to two million people boxed in the narrow streets of its old town. It starts with shooting off a rocket known as chupinazo, and ends in a candlelight song Pobre de mí with fireworks. There are several events that take place almost every day of Sanfermines, and several can’t-miss events that only happen once per year, like el Struendo, or “the Roar,” where people crowd outside the town hall at midnight and just make as much noise as they can until they get tired.

Running of the Bulls 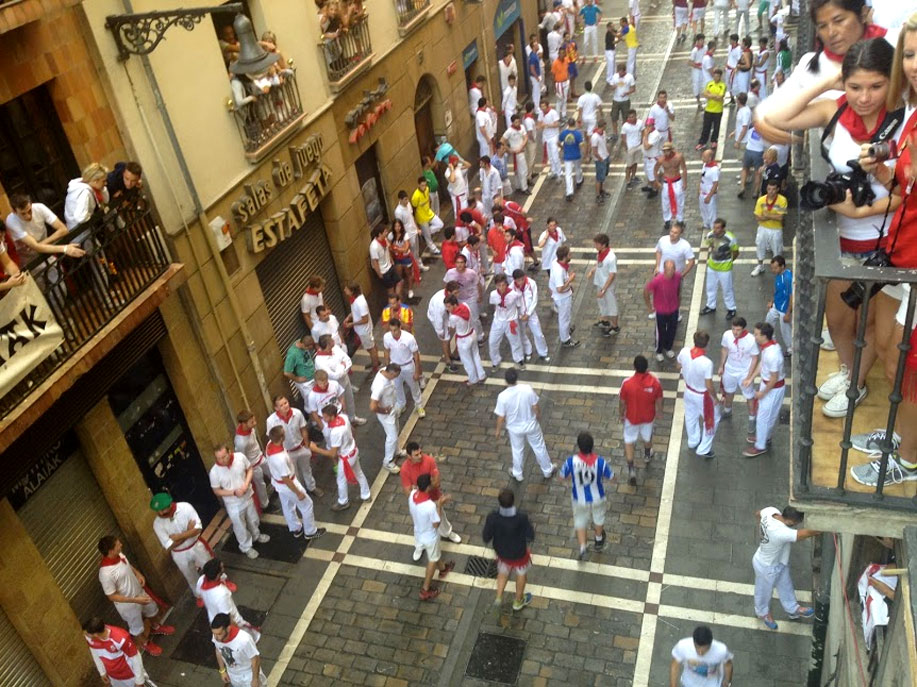 Every day at 8 am between July 7th and 14th, hundreds of people cram together in the bull run in front of six bulls and six other cattle. Each day, a different breed of bull from the most prestigious ranchers is featured, and the runners know they’re coming out of their pen via firecrackers in place of a starter’s pistol. The brave and thrill-seekers runners say a traditional chant to ask San Fermín the saint for protection, then tear as fast as they can dashing ahead of the impressive animals along 800 meters – 2,600 feet – of narrow, cobblestone streets linking the city stables and the bullring  where the run finishes. Veterans runners – some over their 70’s – and adventurous from all over the world meet for an adrenaline rush being broadcast entirely live worldwide. 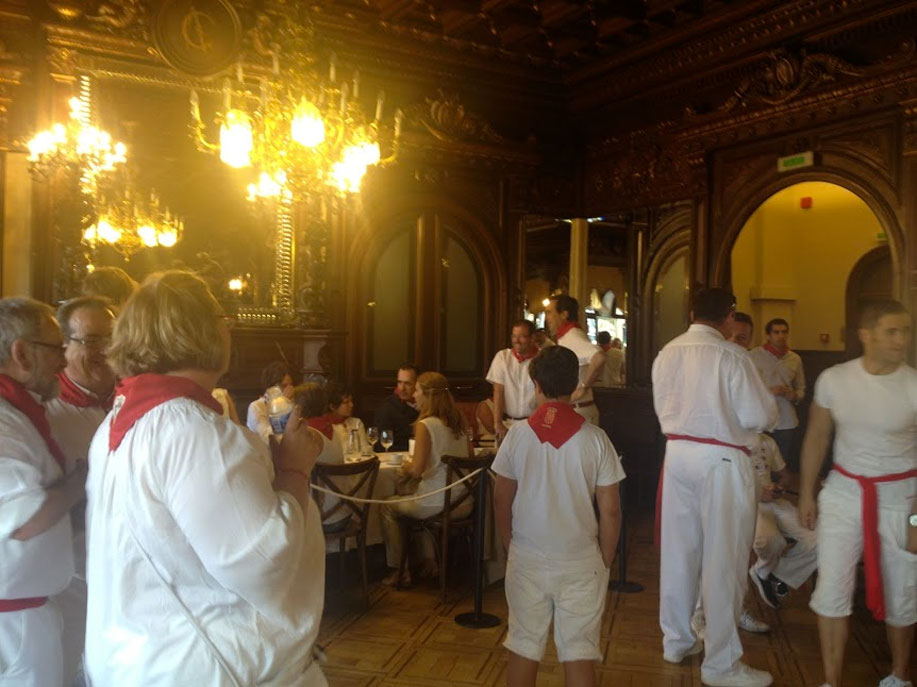 Yes, that’s right, the Royal Spanish family is on the photo! San Fermin is the place to be. The fiesta is unbeatable for drama and excitement. What should you expect on a San Fermin? Early wake up for sure to be at the right place for the running of the bulls – access is under strict control and all adjacent streets are cut well in advance – because no later than 7.30 am you should be at somebody’s balcony (if you are fortunate to have contacts or get one) ready to watch the encierro at 8 o’clock. Watching at least once in your life the bull-run live is an unforgettable experience. Treat yourself with some pastry and black coffee while waiting and hold your breathe as you see them pass in the blink of an eye.

Once over, it’s time for churros. Oh, yes, in Spain everything revolves around food. And if you are in Pamplona in San Fermin at least once you have to stop by the oldest churrería, La Mañueta, frying churros since 1872 in olive oil with beech firewood. Family Fernández-Elizalde is keeping the tradition opening exclusively for 9 days a year during the festival. If not, make your way to the Casino Nuevo, where the traditional Espadrille Dance takes place every dat at 9 am; for some the first dance of the day for some, the last for others, and enjoy a vital breakfast where a cup of Spanish hot hearty chocolate can’t be missed. Look out: this is the meeting point for both politicians and famous bullfighters. To enter you must be a member of the Casino or be invited by a one.

What’s next? Every day, the parade of the Gigantes y Cabezudos, or “giants and big heads” in English, is a kid-friendly (and adult-friendly too) procession of special giant puppets originally built by a local artist over a hundred years ago. Operated by puppet masters inside, they make their way through the streets waving to the crowds and dancing frenetically to the sound of bagpipes and txistus (sort of flute).

The Citadel lights up every night with a fireworks session at 11 pm. But about an hour before, the encierrillo takes place, an unknown and somewhat mysterious act. It consists of transferring the six bulls of the day after to the stockyards “corrales” in Santo Domingo street – where the running starts -. Far from being a show it is done without runners and with very restricted access for any spectator. In complete silence, even the use of flash in cameras is absolutely forbidden not to distract the animals. The act has a certain mystical air, surely because of the silence under the moonlight.

The music is present all night in the city until six in the morning and the old town bustles without rest until dawn. 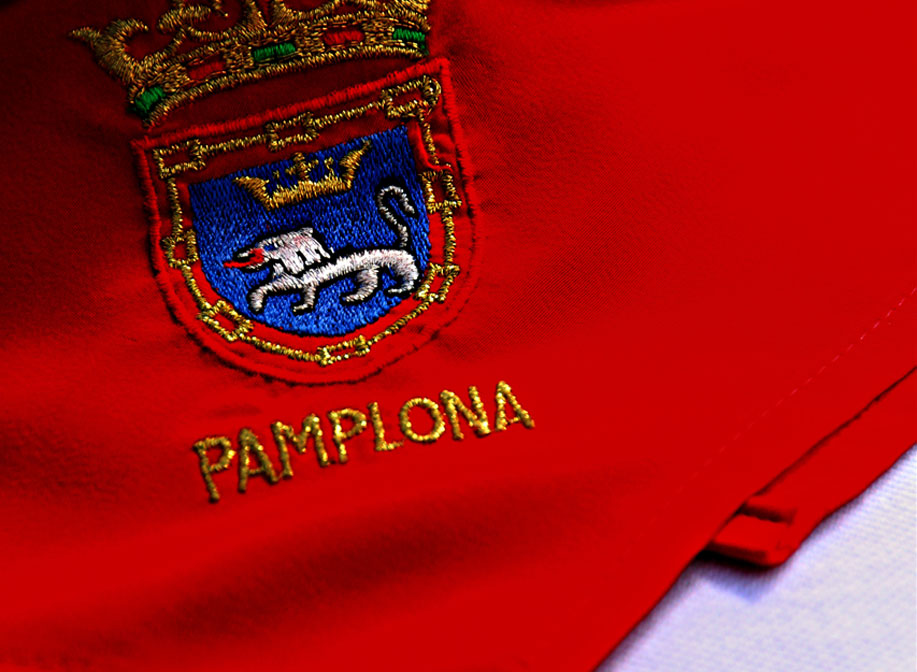 The origins of this vivacious festival—also known as Sanfermines—date back to the 1400s, when an annual cattle market, complete with bullfighting events, and a series of religious ceremonies honoring one of Pamplona’s patron saints, San Fermín, were both rescheduled for the same time during the summer and officially paired.

San Fermín was put to death for preaching Christianity around 2,000 years ago and gained martyr status in the Catholic Church. While some sources say he was beheaded, others say he was dragged through the streets with a crowd of bulls running behind him, which is the origin of the running of the bulls that happens every year to this day. But from a tragic death, eventually came one of the high-spirited and celebratory festivals in the world. Over the centuries, the festival gained more and more traditions of revelry, like the massive and difficult to operate puppets known as gigantes, tons of fireworks, and, of course, lots of eating and drinking.

For more information on how attending San Fermin Festival in a very exclusive way check out our services here and don’t hesitate to contact us.