Semana Santa in Seville : The sweet taste of the City

Semana Santa in Seville : The sweet taste of the City

Semana Santa or Holy Week is the biggest annual religious event in Spain. From Domingo de Ramos (Palm Sunday) to Domingo de Resurreccion (Resurrection Sunday). Sombre processions of nazarenos – robed figures wearing capirotes (pointed hoods) which cover their faces, and sometimes barefoot – process through the streets of towns and cities, with life-size statues of Jesus Christ and the Virgin Mary on pasos (floats), and sometimes a third float with a misterio (bible scene tableau). Incense fills the air with its exotic scent and smoky sense of mystery, while marching bands with their wailing trumpets and banging drums add to the theatre. Such pageantry takes over the streets of Andalucia every Easter. 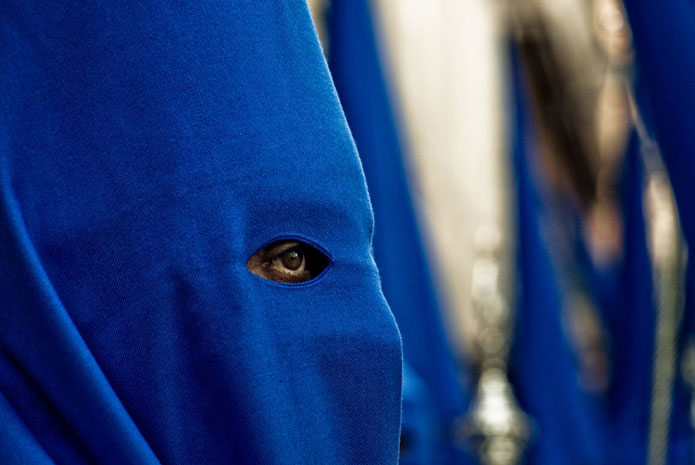 Probably Spain’s most famous Semana Santa celebrations are in Seville, with around 60 processions going out over the week, attracting up to a million spectators from the city and around the world. Sevillanos have huge pride in the exquisite artistry of their pasos, from the 500-year-old wooden statues, to the hand-embroidered velvet capes of the Virgin.

Each procession is organised by an hermandad (brotherhood based in a church), and consists of its members in various roles: the narazarenos carrying candles or crosses, and the costaleros, who are hidden under the float behind a curtain, and shoulder the weight – up to 600kg – of the statues. They work in shifts, swapping with colleagues regularly, and can be spotted in the street, still wearing the white padding they use to carry the paso, having a well-earned beer during their breaks.

As the costaleros can’t see where they’re going, a man called a capataz directs them. Some manoeuvres – getting a paso in and out of a low, narrow medieval church doorway with just inches to spare, or turning a tight corner from one street into another – take months of practise.

Some processions have as many as 3,000 nazarenos, and take over an hour to file past. They make their way from their church to the cathedral, along a pre-planned route which could be as little as one mile, or as much as six or seven miles, and then back again. The logistics are extraordinary, with up to nine hermandades in the street at any one time; some take 14 hours to complete the journey.

The most mesmerizing moments happen after dark – as dusk falls, the nazarenos’ and pasos’ candles are lit, and the sight of silent hooded figures takes you back in time. Haunting brass bands, thudding drums; the scent of Seville’s orange trees in blossom, mingled with flowers and candles bedecking the Virgin’s paso, and the incense which swirls in clouds before the pasos; and, the climax, a mournful, heart-rending saeta – a gypsy prayer which became a flamenco song to the Virgin or Christ, a song of intensity and passion delivered to the figure from a balcony overlooking the statue (they know exactly where to stop), or down on the street. This, along with the salida (when the paso leaves the church, greeted by adoring cries and gasps), is the high point of the whole dramatic, ethereal experience.

Andalucia is justly famous for its superb cuisine, and this includes dishes which are traditionally made for specific events, such as Semana Santa. These desserts, typically based around flour, sugar and eggs, with some honey and wine thrown in for good measure, are strictly for the sweet-toothed.

Torrijas is a dessert similar to French toast – bread soaked in honey and wine, then dipped in egg and fried, and sprinkled with cinnamon or sugar (yes, even more sweetness).

Pestiños are pastries made of deep-fried batter dipped in honey or sugar.

Roscos are small donuts made with sweet wine, such as muscatel, and sprinkled with sugar.

There is a vast list of desserts with Arab influence and a fun way to taste them by learning how to make some! 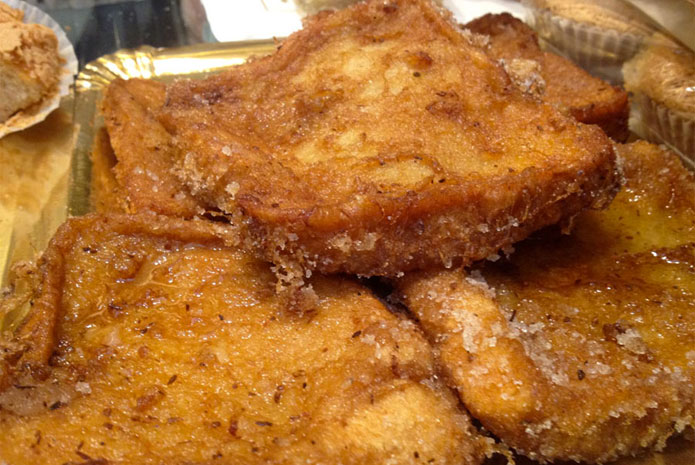