10 foods from Navarra you should try in the Basque Country

10 foods from Navarra you should try in the Basque Country

Grazing the Pyrenees from the north of Spain, the region of Navarra is known for its green landscapes and cool climate, as the many pilgrims that cross the province walking the Camino de Santiago will be able to confirm. But Navarra is also homeland of the astonishing desert of Bárdenas Reales, one of only a few deserts in Europe and definitely impressive. Navarra‘s natural beauty is the region’s best emblem, but it is internationally renowned for the running of the bulls in its capital, Pamplona, during the San Fermín festival that takes place every month of July.

Having been part of Eukal Herria – formed by Navarra and regions from the Spanish and French Basque Country – Navarra distills a unique character created after centuries of political struggles. In the land of contrasts, the strong-willed locals might seem determined and cold-hearted at first glance, only to discover that they hide a much warmer version of themselves once you get to know them. Navarrans are also known for being very proud of their gastronomy, as food plays an important role in their culture. In fact, the quality of their fresh produce is enviable, being big exporters of fruit and vegetables to the neighboring regions and the Basque Country. 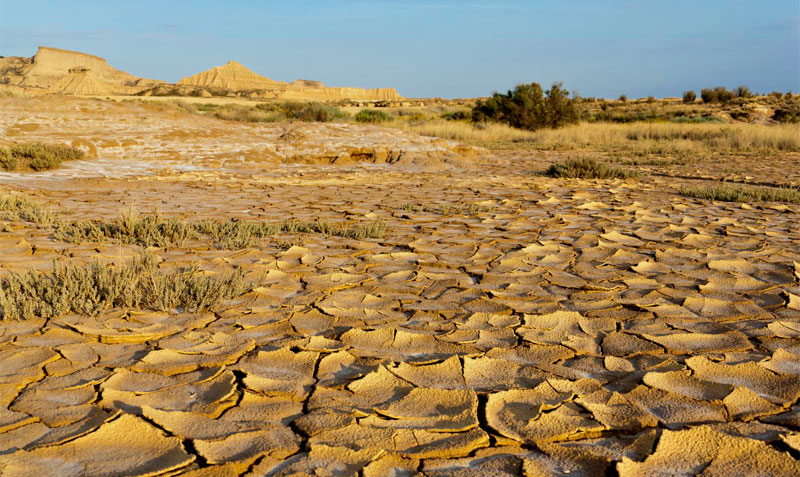 Navarra is the garden of the Basque Country and its gastronomy is influenced by the Basque cuisine. Along with all their excellent horticultural products, the region’s top foods are cheese, red meat from the Pyrenees and wine. Be ready for big portions, hearty dishes and pintxos galore. And be prepared to brush up your Spanish at the gastronomic societies (sociedades gastronómicas, private food clubs), where people gather to cook and eat together: you’ll be having lots of costillas de cordero, txuletón a la brasa, ajoarriero and canutillos.

Now let’s have a detailed look at the 10 foods you should try when you visit Navarra.

The pintxo culture is probably one of the best things invented by humankind, no wonder it quickly spread beyond the Basque Country. Imagine entering a bar and finding a buffet-style array of bite size delicacies such as Spanish omelette, Lizarra sardines, garlic prawns, anchovies and plenty of other small creations with the best local ingredients. Grab a stool or simply stand in the crowd while enjoying some social time amongst the locals. 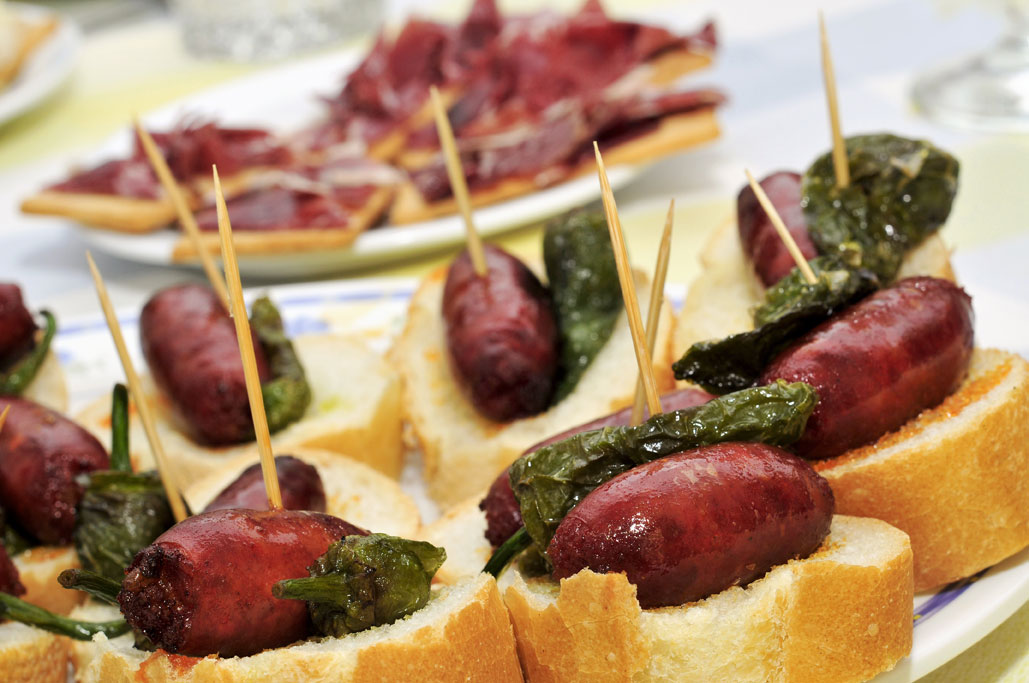 No wonder Idiazábal cheese is acclaimed around the world: this is a cheese with a unique flavor, made from latxa sheeps’ raw milk living in the Pyrenees, which are milked manually during the summer season. The cheese obtained has a deliciously intense, slightly spicy flavor with smoky notes. Roncal, on the other hand, is a cheese from the Pyrenean valley of Roncal. It is handmade between December and July using raw milk from latxa and navarra sheeps. The minimum aging period is four months. 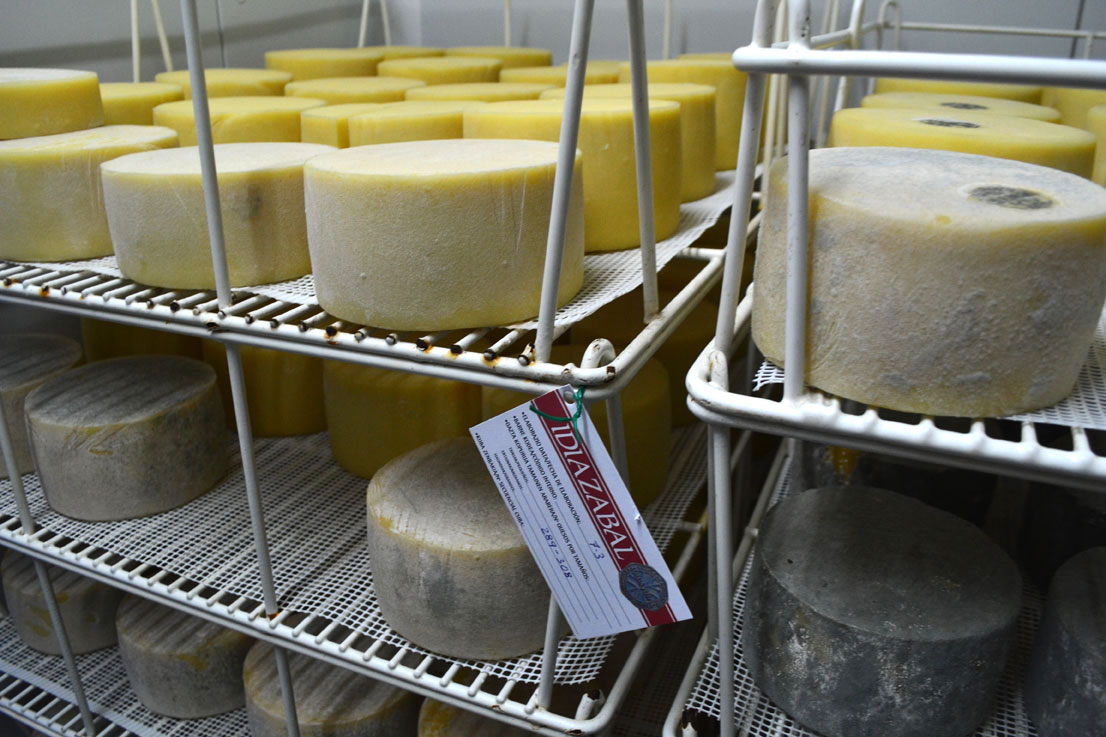 Chistorra is a sort of thinner chorizo that’s only cured for a short period of time (usually between 1 and 25 days). It’s bright red and a bit spicy, as it’s seasoned with paprika and garlic. You’ll find chistorra pretty much everywhere in Navarra, often fried in olive oil and served on top of a bread roll, which makes for an excellent pintxo. 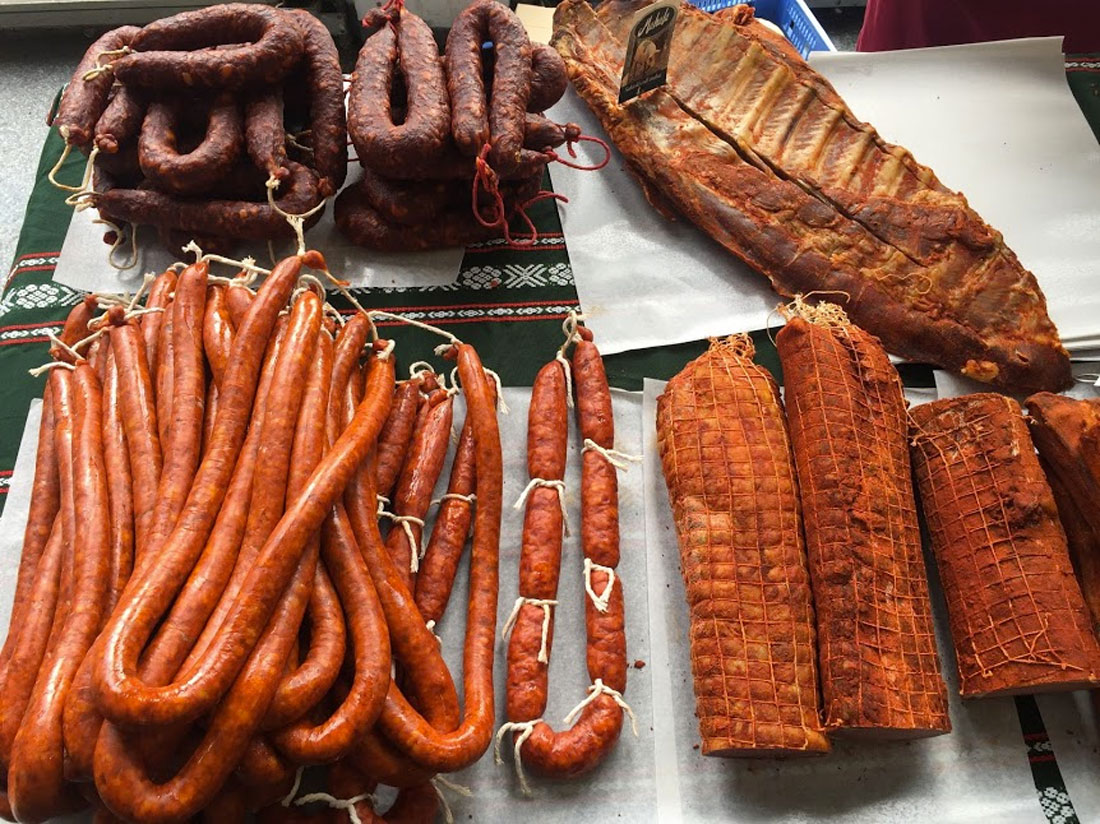 These red peppers are one of the stars of the Navarran horticulture, being very appreciated in the Basque Country too, where they are big consumers of these peppers. A truly local product, they are only grown in eight different towns having the denomination of origin certificate. Nowadays they are available all year long, even though the best season to enjoy them fresh is from September to December. 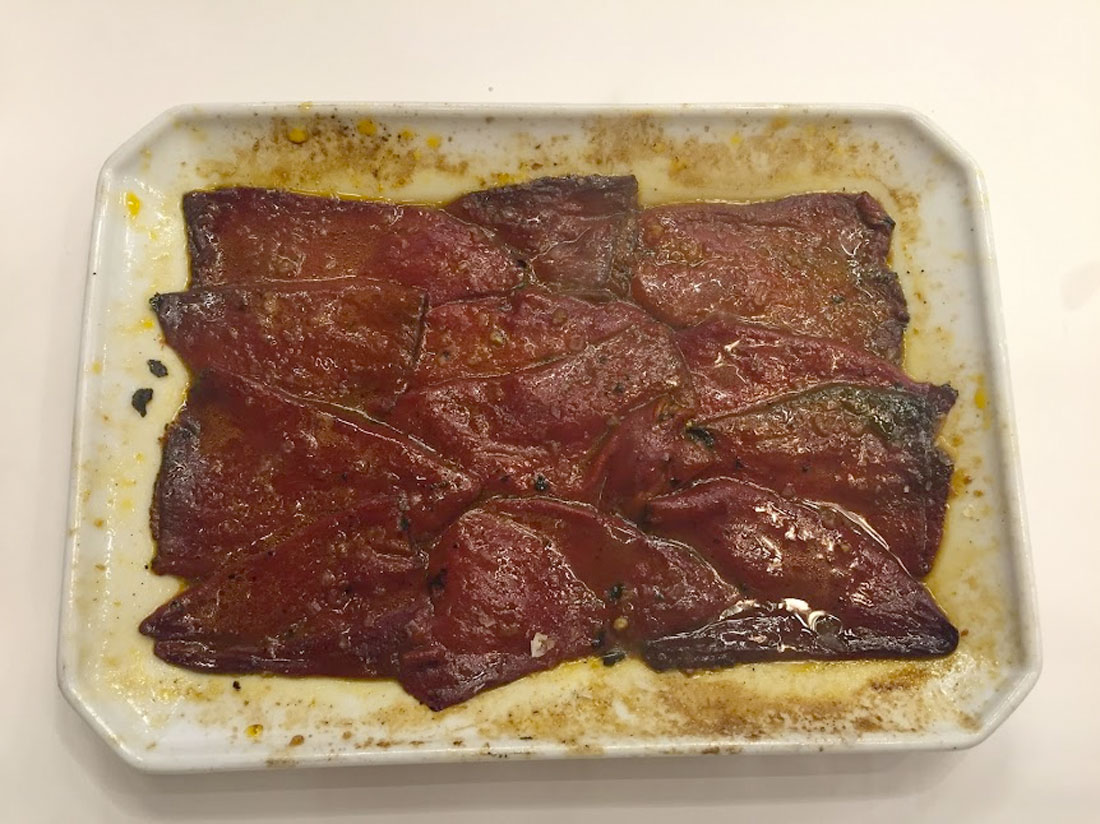 This is a geographically protected vegetable cultivated in 33 Navarran towns. Known for its many health benefits, artichokes can help with liver and stomach problems. They are usually fried or boiled, served in dishes such as menestra or mixed with clams or cured ham. 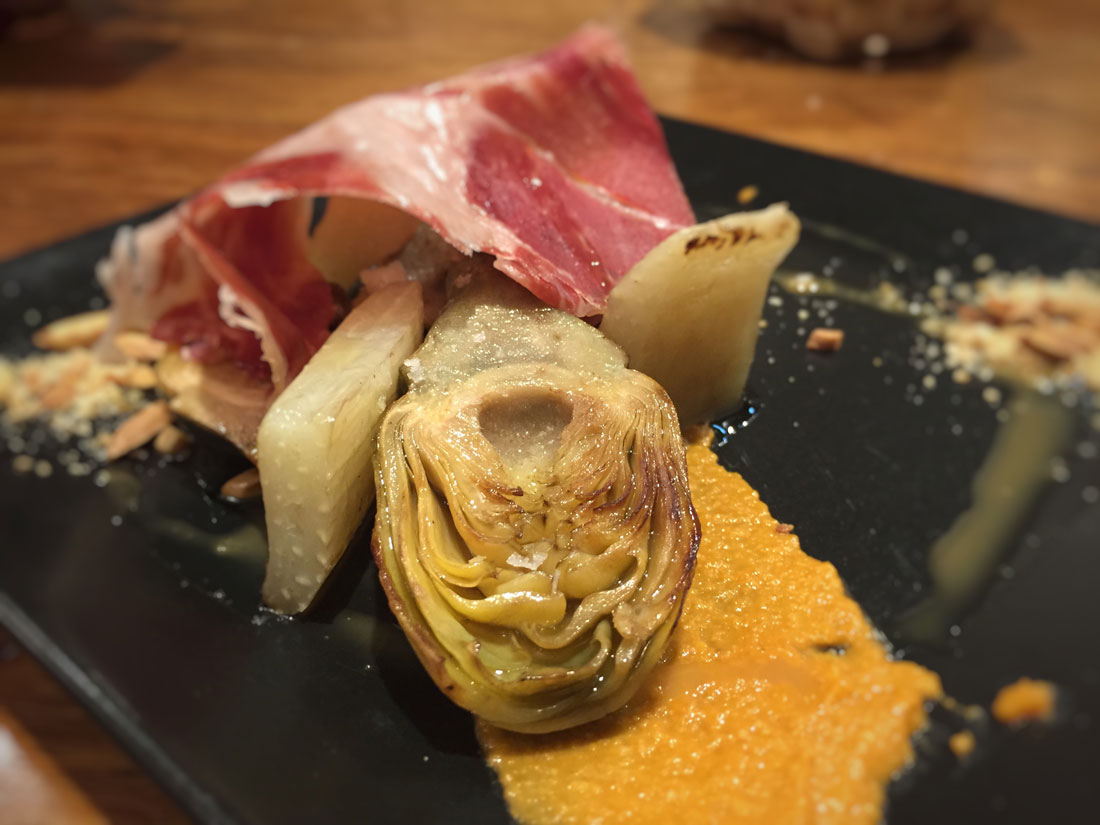 The flavor of Navarran lamb is hard to find anywhere else, so make the most of it while you’re there. This meat has very little fat, while still being juicy and having a soft texture. It is used in a wide range of traditional dishes: cordero al chilindrón, calderete, costillicas a la brasa and many more.

The espárragos blancos are amongst the best products that grow in the Navarran lands, proof of this is their high demand and price. This ingredient is one of the oldest vegetables consumed by humans, known for its particular texture and delicious flavor. Collected at the end of March, this type of asparagus is present in many entrées. 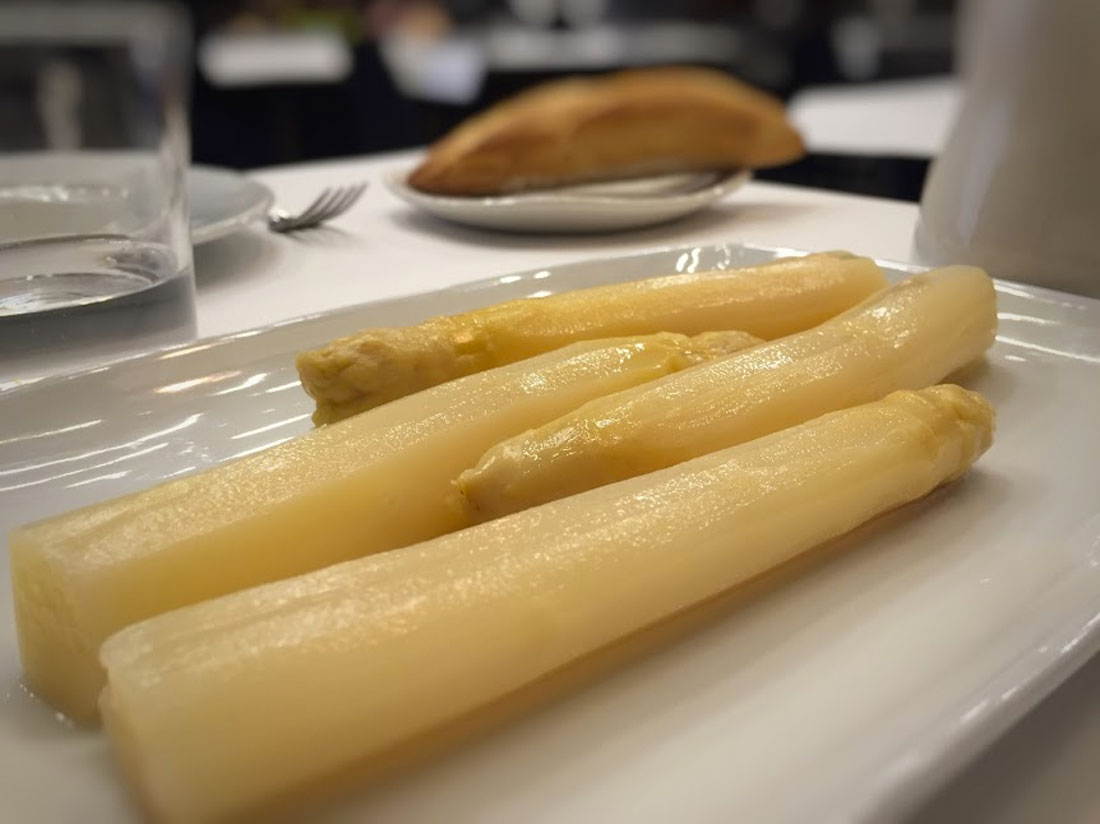 With so many Navarran ingredients having quality certifications, the beef from this region had to be included in the gastronomic elite too. Indeed, the meat from this Pyrenean beef breed is not to miss: soft, juicy and lean, it’s perfect to be enjoyed straight from the barbecue. Order a txuleton a make your tastebuds dance! 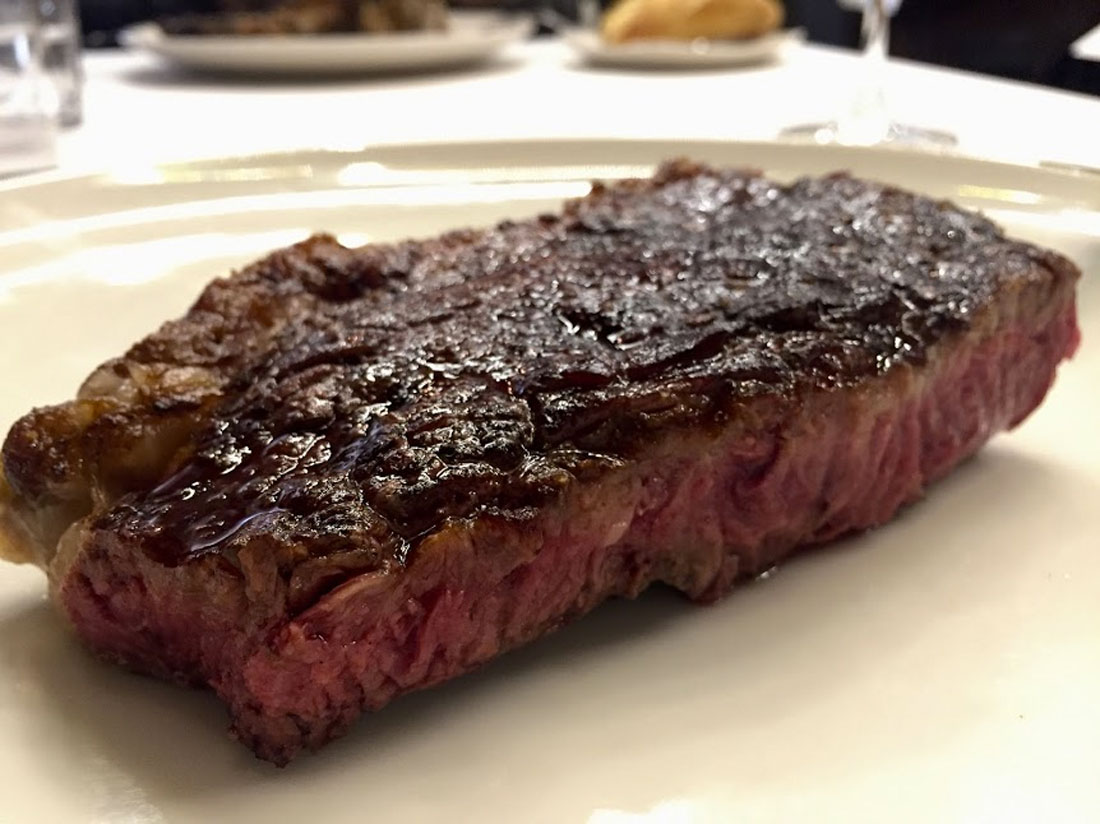 Having a Basque origin, Pacharán is a digestif liqueur made of sloe fruits macerated in anisette and spices for a few months. The final product is a reddish liquid containing about 30% of alcohol that is enjoyed after the meals, usually on ice, as it’s believed to act as a stomach tonic.

Navarra is a major wine-producing region as well. The appellation D.O. Navarra benefits from an extraordinary location: the proximity of the Bay of Biscay, the influence of the Pyrenees and the temperate climate from the Ebro valley that all together make it a unique area for grape growing. Grenache, graciano and tempranillo are the red native varieties, while whites are made from viura, malvasia, white grenache and muscat “small grain”. Underrated for too long, wines from Navarra are now living a new wave.

We didn’t mention its delicious foie, the sweet lettuce hearts or the fabulous cider. With so many wonderful local ingredients, enjoying multiple gastronomic experiences while in Navarra is a must. We suggest savoring the culinary creations of one of the Michelin-starred restaurants in contrast with having local food experiences through which you’ll be able to discover breathtaking landscapes and dreamy towns.

Would you like to include Navarre in your next journey across Spain while visiting the Basque Country, contact us and we’ll be delighted to assist you.