The Moroccan vineyard has been in continuous evolution over the past 40 years. To our delight, Morocco has a diversity of styles and recovered thousands of acres of forgotten wine lands. In fact, let's not forget that Morocco remains one of the cradles of the last wild wines, and a Kingdom where the first wines were made around the 6th century BC during the setting of the Phoenician and Greek civilizations.

Nowadays, winemaking in Morocco boasts 7,000 hectares of vines, more than 50 million bottles produced per year, and a solid quality classification of three AOCs (Controlled Designation of Origin) and a handful of AOGs (Designation of Guaranteed Origin).
There is something to delight each of our curiosities. From Meknes to Casablanca, our Morocco wine guide explores the exotic treasures under the sign of the sun. 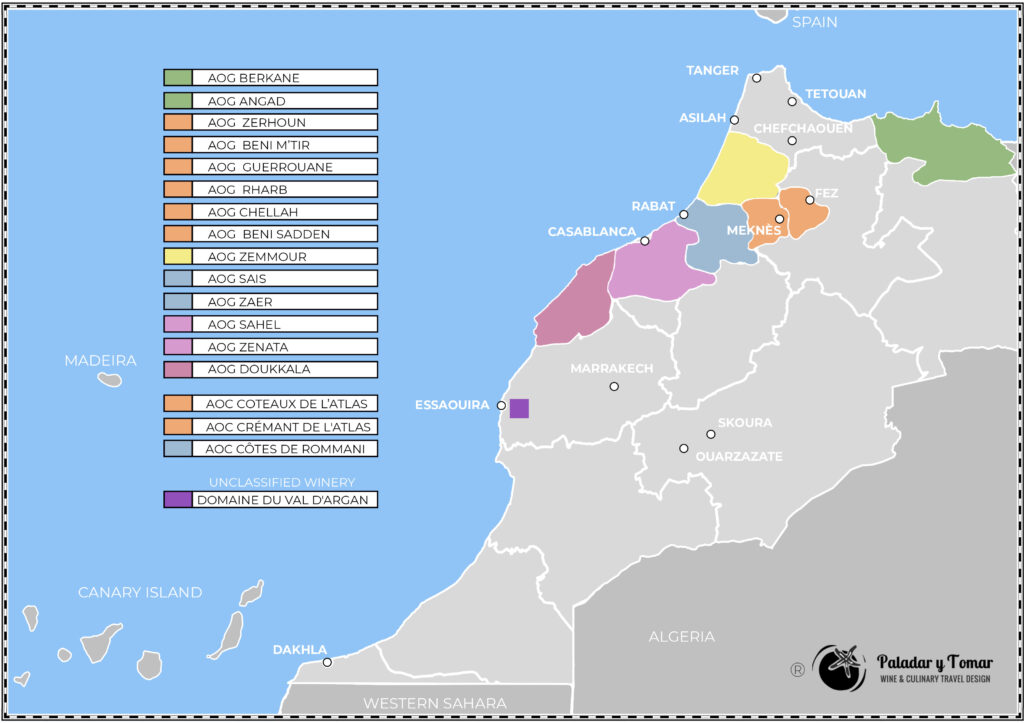 Wine in Morocco is Not a New Affair

With its appealing red, white, and rosé wines, Morocco is the second largest wine producer in the Arab world after South Africa. Viticulture in Morocco goes back to Antiquity, when wine was cultivated around the city of Volubilis in Mauretania Tingitane (where current-day Meknes is located). At the time, this ancient Berber city was famous for trade. The settlement of Phoenician and Greek counters around the Mediterranean basin encouraged the exchange of many foodstuffs, including wine contained in amphorae. Thanks to Roman colonization, viticulture was developed. Thus, wine-growing in Morocco was born from a strong identity linked to its history, in a territory where wine followed the movement of civilizations.

Fast forward to 1912, Morocco became a French protectorate and underwent radical developments in viticulture. This happened after the phylloxera, an insect pest that targets grapevines, ravaged most European vineyards from 1875. Vineyards were created by French merchants, who found their niche in wine. This sparked the beginning of mass production of Moroccan viticulture, where high yields mattered more than the quality of the wine. Most of the wines were exported to Languedoc in order to enrich the mass production of table wines in the South of France.

One of the most important turning points in modern Moroccan viticulture happened in 1923, after a Belgian company settled near Ben Slimane to create a wine-growing estate. A few years later, the first harvest took place in 1927. This estate is currently owned by Thalvin and bears the name of Ouled Thaleb. After a period of prosperity, other domains were created under the same name around Meknes, Rabat, Tiflet, and Khemisset.

In 1956, Morocco gained independence from France and winemaking activity was nationalized. The Kingdom inherited all vineyards and cellars, and viticulture was put on hold until the 1990s due to economic, cultural, and religious reasons.

For instance, in 1967, the Treaty of Rome prohibited the blending of European wines with foreign wines. For Morocco, this marked a period of stagnation: the country lost an important market and entered a crisis of overproduction, uprooted vines, and closed cellars. Winegrowers were forced to abandon mass production and had to move towards bottling their own wines and bet on more qualitative grape varieties such as Chardonnay, Roussanne, Syrah, and Cabernet.

Resurgence of the Wine Industry in Morocco 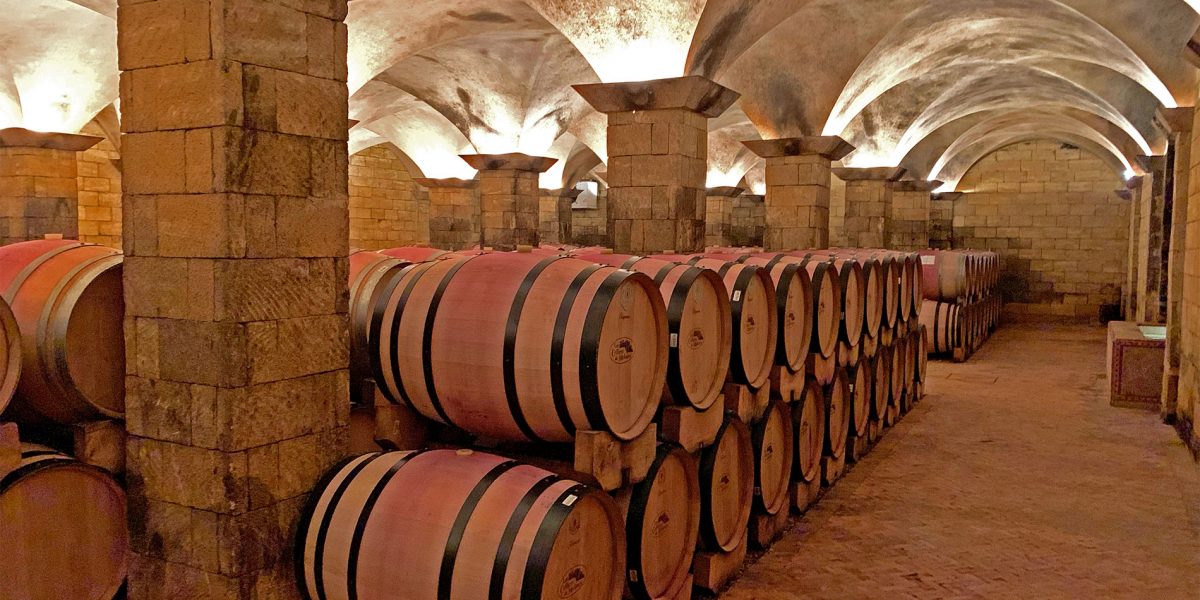 From the ashes of an industry once created to serve France’s bulk market, a wine scene carefully rises in a progressive Muslim nation, and investments from wine families from France and Spain started coming in. Today the region of Meknes alone represents half of the Moroccan vineyard, and Morocco is one of the member states of the International Organization of Vine and Wine (OIV). Despite a restrictive policy, wine remains a booming economic sector with a production of over 40 million bottles per year. A large quantity is exported to Europe, while the rest is locally served to travelers and non-Muslims at restaurants and riads, or sold in wine shops to be consumed in privacy. In 2008, the Ministry of Agriculture authorized a wine estate to carry the appellation “Château” for the first time, with the Château Roslane, under the AOC “Coteaux de l’Atlas” premier cru.

Rosé is both a climatic and cultural fit for Morocco. In fact, Morocco’s position at about the same latitude of California’s Santa Barbara wine region makes it the perfect territory for Syrah and Grenache. Influenced by the French trends, the pale rosé called vin gris (gray wine) is subtle and refreshing, and is associated to the wines of Provence in the South if France.

Rosé is both a climatic and cultural fit for Morocco, in fact the position at about the latitude of California’s Santa Barbara wine region makes it a perfect territory for Syrah and Grenache. Influenced by the French trends, the pale rosé called vin gris (gray wine) is subtile and refreshing, and is associated to the wines of Provence in the South if France. 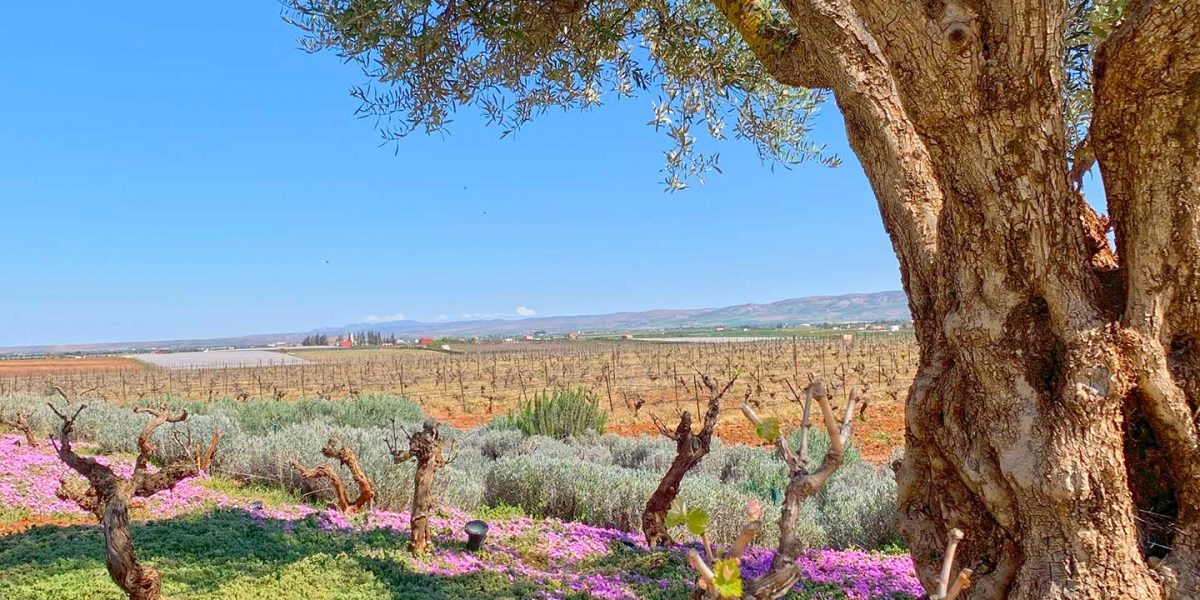 In this context, the first AOC was awarded for the still wine called Côteaux de l’Atlas in 1998, with a recognition for the special mention premier cru in very specific years. Therefore, on some labels you might see AOC Côteaux de l’Atlas Premier Cru from Château Roslane. Finally, a second AOC was granted in 2009 to sparkling wines from the traditional method, AOC Crémant de l’Atlas. The two designations are in the region of Meknes.

The latest AOC recognition goes to the Côtes de Rommani, in the Zaêrs region about halfway between Rabat and Fez. This is one of the most promising terroirs in Morocco, with an average of 5°C less than in Meknes. It includes red, rosé, gris, and white wines from the Domaine de La Ferme Rouge.

The following are 14 geographic designations so that you can identify any wine bottle during your Moroccan journey: Guerrouane and Beni M’Tir (region of Meknes), Angad and Berkane (region of the Oriental), Chella (region of Rharb), Zare, Zenata and Doukkala (region of Casablanca where the famous vin gris – which is in fact rosé- is produced); Saïs, Beni-Sadden, Zerboune, Zemmour, Gharb and Zaër.

Soil & Climate
The climate is oceanic Mediterranean but the mountains provide areas with continental and Saharan influences. Morocco, looking at both the Mediterranean and the Atlantic, benefits from the oceanic influence and that of the Atlas Mountains, which bring a necessary freshness to these arid and very hot regions.
The hillside vineyards and the mild temperature make the Meknes region the most  privileged wine-growing area. In fact, Morocco’s main vineyard regions lie up north, including the Meknes-Fes area as well as Berkane and Casablanca, which have a shale and gravel sand soil ideal for vines. The close proximity to the ocean and the protection of the Atlas Mountains contribute to keeping a warm, steady temperature year-round. 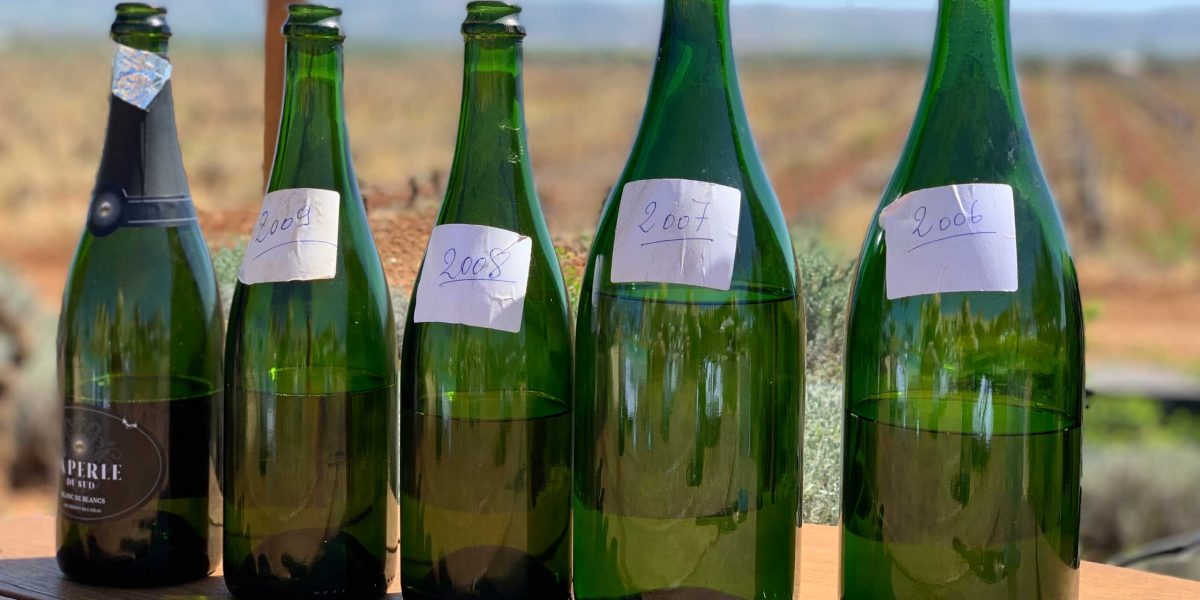 Big names include Brahim Zniber, Pierre Castel, Bernard Magrez, Charles Mélia, Gérard Gribelin & Philippe Gervoson and Alain Graillot and, of course, actor Gérard Depardieu. All of them were seduced by the warmth and exotism of Morocco vineyards.

Château Roslane is the Moroccan leader with 85% of the production. Created by Brahim Zniber in 1964, it is part of Celliers de Meknès group that operates 2,000 hectares in AOG Guerrouane, AOG Beni M’tir and the AOC Côteaux de l’Atlas. This is the only winery with premier cru classification. The historic cellars dating from the protectorate have been preserved and still bear the names of their builders. They are now used for wine storage. Among their labels, we especially liked the Château Roslane Pemier Cru 2017 AOC Côteaux de l’Atlas made of Cabernet Sauvignon, Merlot and Syrah. Fans of traditional winemaking will love their sparkling La Perle du Sud made under the méthode traditionelle.

Domaine Ouled Thaleb was the first winery created in Morocco in 1926, located up the Atlantic coast and 20 miles northeast of Casablanca in the Benslimane region. Since 1968, Thalvin operates the cellar and the vineyards, planting only with noble French grape varieties. They have premium wines but we for a very reasonable price, Cuvée du Président Blanc from sémillant grape is delicious and easy to find on wine menus. Syrocco is a 100% Syrah crafted by the legendary French vigneron Alain Graillot from Crozes-Hermotage.

One brand to try is Domaine de Sahari. Former Maison Malesan bought to Bernard Magrez in 2004 by Groupe Castel -, whose vin gris du Maroc is a local favorite with a light-bodied, slightly fruity, crisp flavor.

Special mention should also be made of Les Deux Domaines – with the participation of the well-known French actor Gerard Depardieu. They produce Lumière, a nice AOG Guerrouane made of carignan and grenache.

Jacques Poulain’s new dream is La Ferme Rouge. With a history going back to its creation in 1908, Poulain is now the new head of the winery and the enfant terrible of Moroccan viticulture. After relaunching the production of Thalvin, this French oenologist has been handling his personal project. His wines gained the third AOC recognition in Morocco (AOC Rommani). At 450m altitude and 45 km from the ocean, the vineyard still benefits from a strong Atlantic influence. It is also protected to the west by the valleys of Wadi Korifla and to the south by the first foothills of the Middle Atlas

The French presence continues at Domaine de la Zouina. The Gribelin family left their château in Pessac-Léognan, Bordeaux, to settle in Meknès, at Zouina, in association with Philippe Gervoson, of Chàteau Larrivet Haut-Brion. The estate covers 115 ha of clay-limestone soils and 63 ha of Cabernet, Syrah and Chardonnay have been planted. Their ambition is to make it a classified growth (premier cru classé). We love Epicurea white (chardonnay in French oak), and from their two Epicurea reds, and the syrah.

Domaine du Val d’Argan is probably the most Mediterranean wine style. Created by Charles Mélia, (La Font du Loup, Châteauneuf-du-Pape) it has 30 ha of Mediterranean grape varieties from the Rhône valley planted in 1994: Clairette, Bourboulenc, Ugni Blanc, Syrah, Grenache and Mourvèdre. It’s the only winery on these lands of olive and argan trees, near the coastal city of Essaouira. Their wines are present on the greatest tables around the Kingdom.

Among the most internationally awarded Moroccan wines, Tandem (100% Syrah) from Thalvin company was awarded at the Bordeaux fair in 2017. There is also Ithaque AOC Les Côtes de Romanni (90% Syrah and 10% Tempranillo), an elegant and remarkable wine from La Ferme Rouge in Beni M ’Tir region. The rosé Volubilia by Domaine de la Zouina was also awarded in Bordeaux too and Première de Baccari from Domaine de Baccari reveals itself complex and refined, made of Cabernet Franc and Syrah.

If you want to discover more about Morocco, we invite you to explore our inspiring routes.