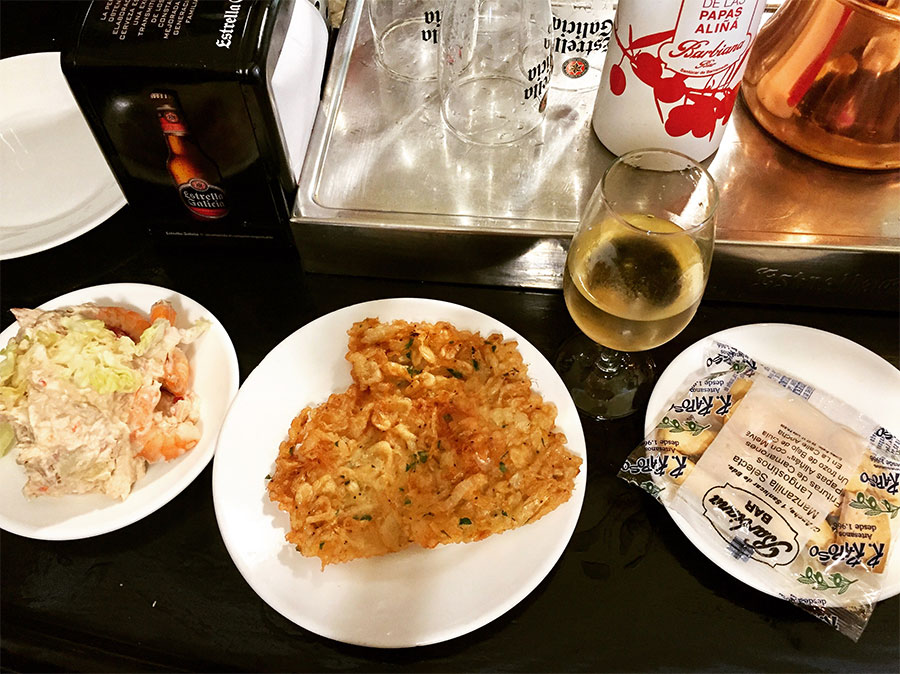 Unquestionably tapas style way of eating has become one of the world’s preferred eating out options. There are plenty of good reasons for it, and Spaniards use even the verb form tapear when they refer to hanging out for bar hopping, enjoying small portions of mouth watering food with a caña (small ice-cold draft beer) or a glass of wine. There is little comfort, but the informal vibe and huge range of tasty flavors is what gives to tapas its distinctive character.

Andalusia is one of the best regions for Spanish tapas – come on one of our tours and you’ll soon discover why. And when in Western Andalusia the region’s landscapes, fresh produce and love of al fresco dining, ensures the quality of its dishes. From fresh seafood and Iberian ham to thick salmorejo and tasty shrimp fritters, here are some of the best Spanish tapas dishes you have to try in Andalusia. Wash it all down with a glass of bodied red from Cadiz or a cool sherry wine from Jerez. So if you want to avoid looking like a “guiri” walk into any bar, approach the counter and order any of the following tapas.

Ensaladilla is the queen of Andalusian tapas, featured on almost any menu. Simply called ensadilla in Andalusian rather than ensaladilla Rusa, like in much of Spain, it’s a cold salad made from boiled potatoes mixed with shrimps, crab, tuna, and maybe some vegetables and hard boiled eggs, although everyone has their own recipe. The whole salad is then smothered in homemade mayonnaise. It’s perfect when eaten paired with a caña, a small draft beer. 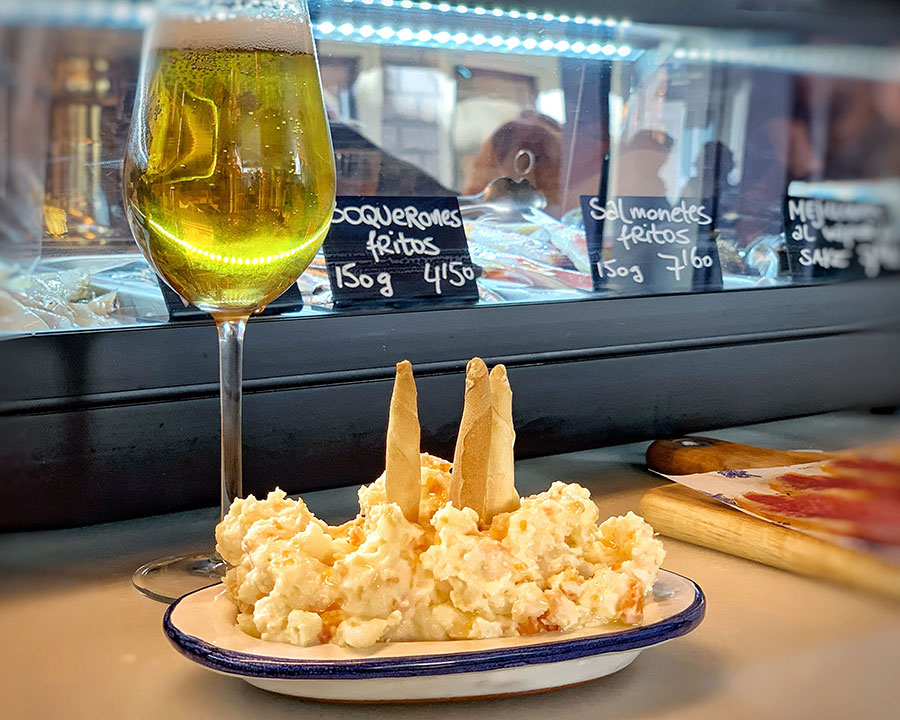 Salmorejo is like gazpacho in that it’s a tomato-based soup served cold. It’s made from tomatoes, garlic, bread and a gentle amount of extra virgin olive oil, and the main difference between it and gazpacho is that salmorejo is a lot thicker and more filling. It’s also typically topped with pieces of Iberian ham and hard-boiled egg. This nourishing soup traditionally comes from the city of Cordoba, but can be found across Andalusia, particularly in summer. Tip: you’ll see sometimes salmorejo is used on top of toasts just as the rubbed tomato is in Catalonia, great with some jamón! 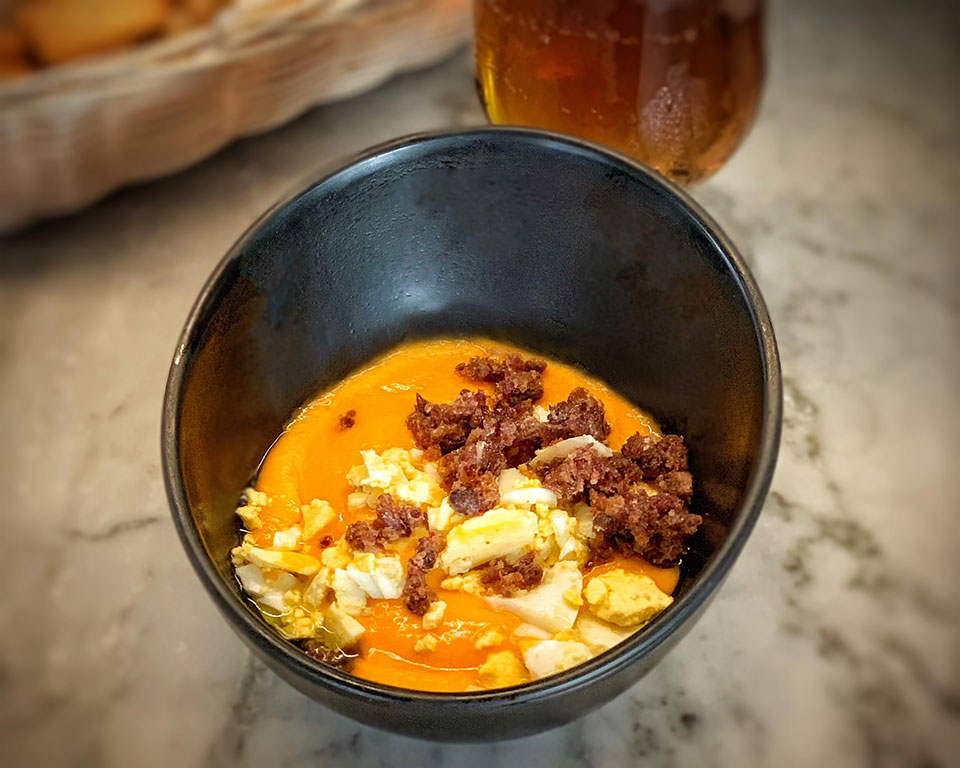 This tapas dish is essentially spinach with chickpeas. Its origins come from the Moors, who ruled Spain for over 800 years, but today it’s a staple in Spanish tapas bars throughout Andalusia. It’s particularly popular in the city of Seville, and can be found in many of its bars and food markets. The spinach and chickpeas are typically cooked with garlic, cumin and sometimes pine nuts and raisins are added too. 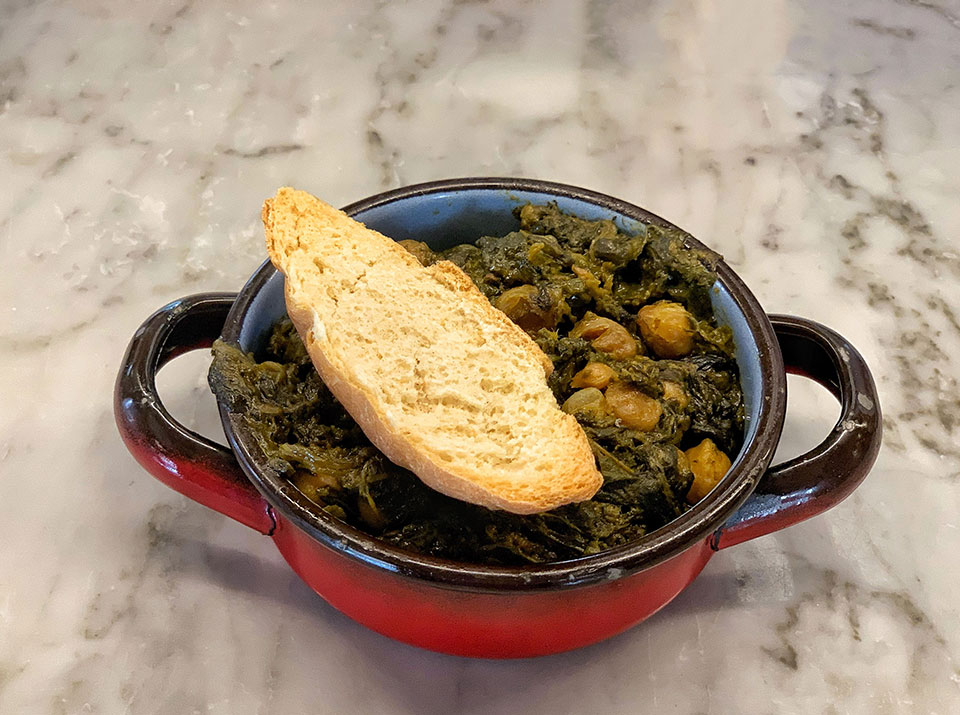 This plate of small fried fish is a very typical tapas dish in Andalusia, particularly in the coastal areas of Cadiz, Malaga and Marbella beach. The whole fish are coated in flour, before being lightly fried in hot olive oil. They can be made from a mix of pijotas (small hake fish), acedías (small sole fish) and salmonetes (red mullet), small boquerones (fresh anchovies), or cazón (dogfish), very popular in Cadiz. Best pairing: we recommend a glass of fresh fino or manzanilla, or a cold bubbly cava, in any case a dry option to clean your palate and get ready for the next bite. 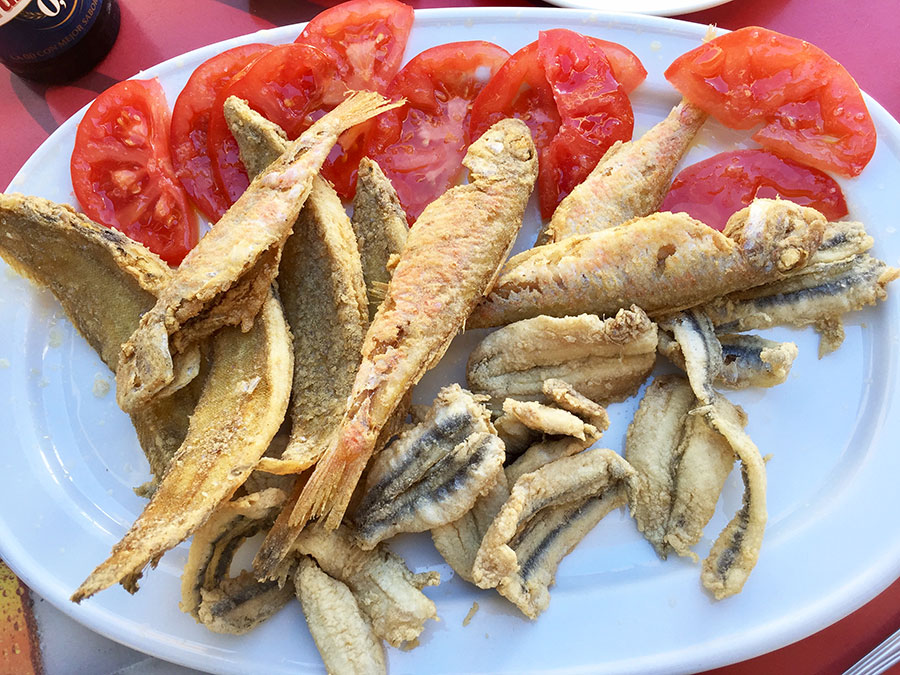 Iberian ham is famous, not just throughout Andalusia and wider Spain, but the whole world. It typically comes from the shoulder or leg of the black Iberian pig. Some of the very best quality ham comes from Andalusia, from pigs that are fed purely on acorns. Sliced wafer thin and bright ruby red in color, it is often eaten on bread with a dash of olive oil or with crackers – named “picos” in Andalusia – and some Manchego cheese as a tapa. You’ll find a tapa of jamon iberico in most of the bars and restaurants, great pairing with a glass of fino sherry, but beer and reds can work too, try different options and find yours. 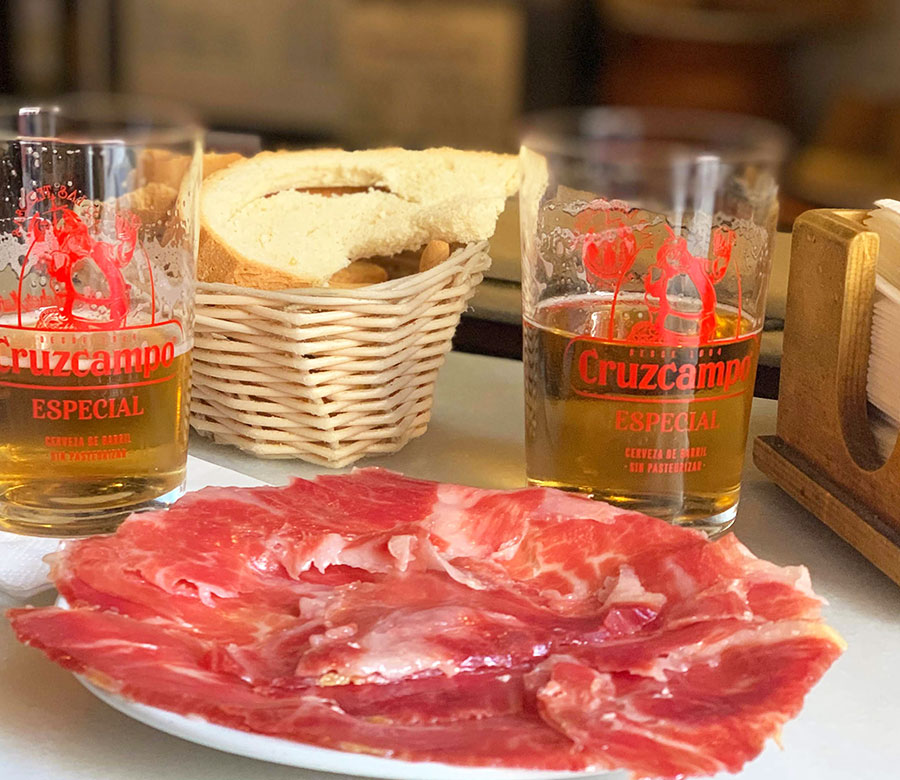 You’ll find chicharrones at almost every bar in Andalusia. Essentially they’re pieces of crispy pork belly and rind, with a good balance of meat and fat. Chicharrones are typically fried, however in the city of Cadiz, you’ll find them roasted and served finely sliced with sea salt and a few drops of lemon juice, as in the photo below. 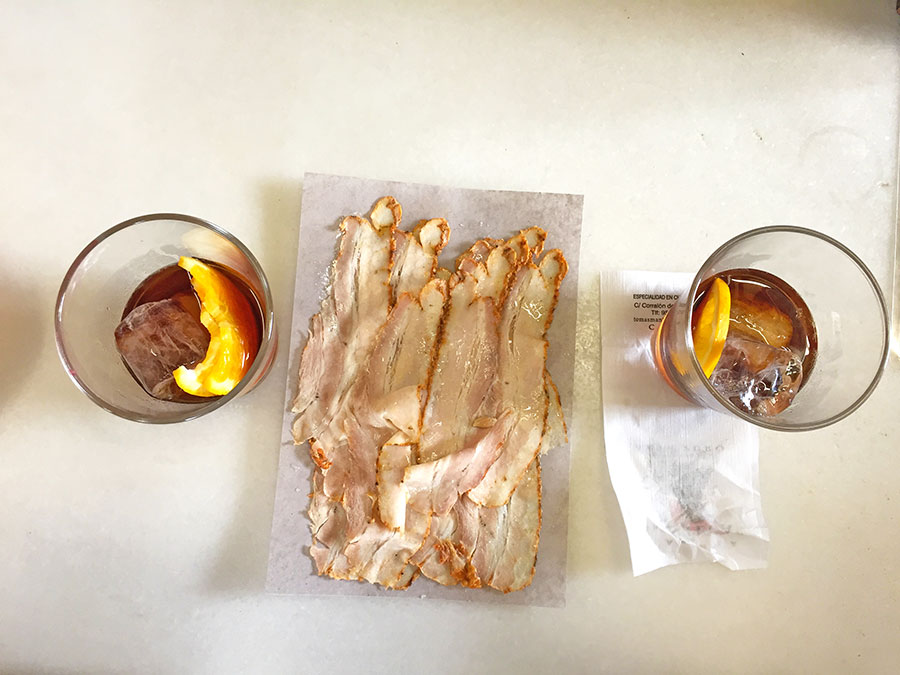 Known as the ‘jamon del mar’ or ham of the sea, mojama is an Andalusian delicacy made from thin slices of salt-cured tuna. It’s best when made from blue fin tuna, which pass through the narrow Strait of Gibraltar into the Mediterranean each May. The tuna are caught using the ancient almadraba fishing technique and are often served with crunchy fried almonds. Two of the best places to try this are the coastal towns of Zahara de los Atunes and Barbate, from where much of the fish is caught. 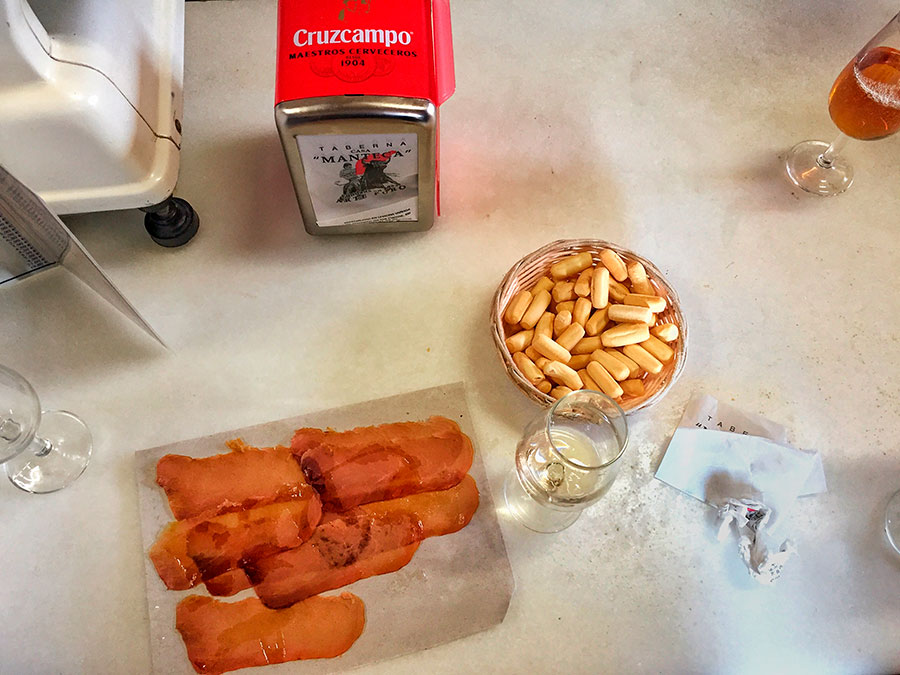 These crispy shrimp fritters are typically found in Western Andalusia’s coastal cities such as Cadiz, El Puerto de Santa María and Sanlúcar de Barrameda. They are essentially made from baby shrimps mixed with chickpea flour, water, spring onions and parsley, before being deep fried in olive oil. One of the most succulent and savory bites. 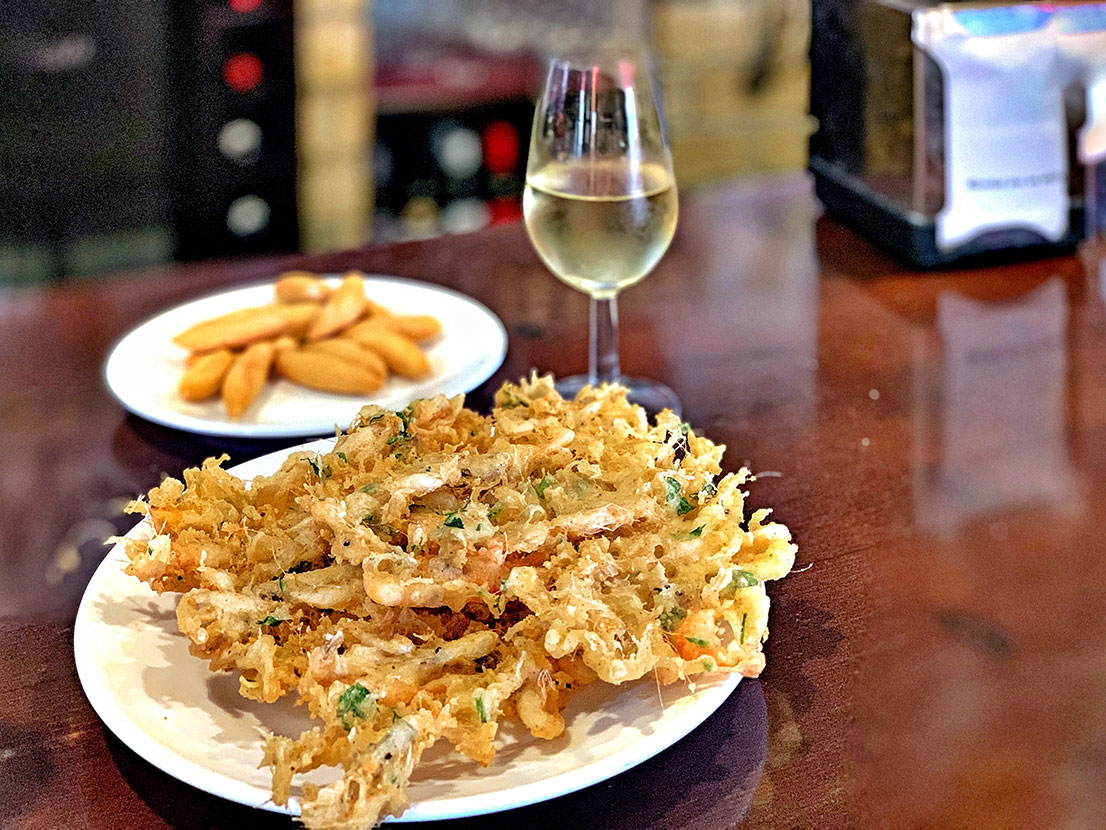 Langoustines are another excellent type of seafood in Andalusia, typically served as a tapa. One of the best places to eat them is the seaside town of Sanlúcar de Barrameda, where they’re boiled and then lightly sprinkled with salt. They’re perfect when paired with a glass of the local manzanilla sherry. 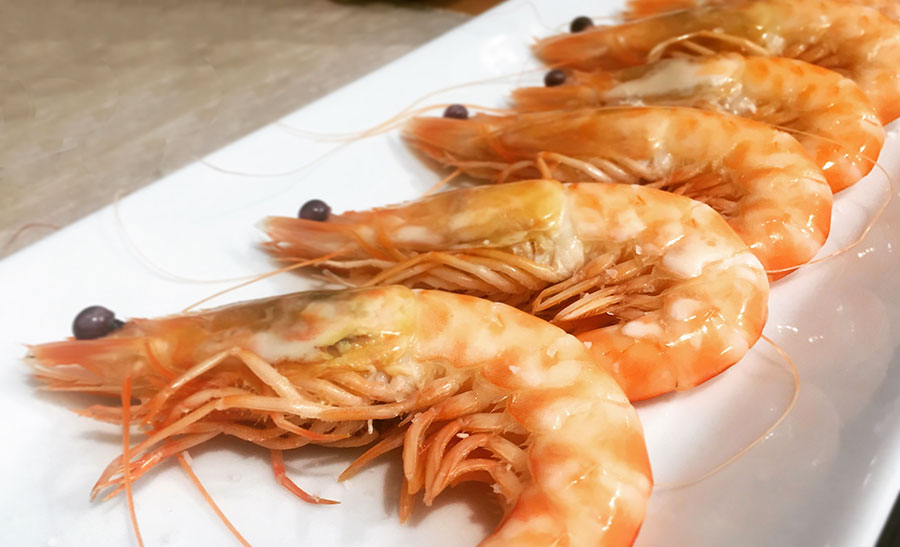