A film by Verónica Escuer and Cristina Jolonch.

Sometimes, very occasionally, some of the key players in a discipline coincide together in place and time. Sometimes, very occasionally, they manage to break down barriers. This has happened with all sort of artists, writers and athletes – and also with the stars of Snacks, Bites of Revolution, a documentary which tells the story of how a group of Spanish chefs passed on to the world their passion and conviction for free creation.

What does Nouvelle Cusine mean to them? What is the aim of New Basque Cuisine? How and why did elBulli break the old gastronomic rules of play and create a new language in the kitchen that is now spoken worldwide? These are some of the issues in a film that discusses creativity, talent, trade, rivalry, friendship, business, hopes, plagiarism, complicity, the future… The Spanish protagonists of the latest culinary revolution, their colleagues from other countries, and experts who have experienced it from the frontline, explain why and how the movement that started in Spain managed to shake the foundations of world cuisine. 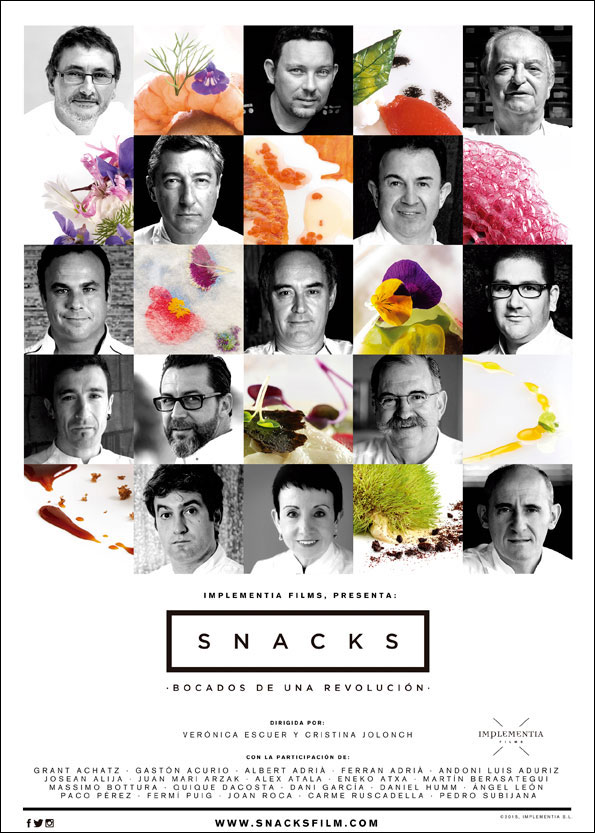 Ferràn Adrià, Joan Roca, Juan Mari Arzak, Martín Berasategui, Andoni Luis Aduriz, Carme Ruscalleda, Pedro Subijana, Quique Dacosta, Eneko Atxa, Paco Pérez, Albert Adrià, Dani García, Ángel León and Josean Alija; colleagues from other countries such as Grant Achatz, Alex Atala, Massimo Bottura and Gastón Acurio; journalists and food experts; all reveal how the magic brigade won the world’s hearts. The world premiere of Snacks, Bites of Revolution will be held in Madrid on 25 May at the Spanish Academy of Cinematographic Arts and Sciences with the participation of some of the stars: Ferràn Adrià, Joan Roca, Juan Mari Arzak, Carme Ruscalleda, Eneko Atxa, Quique Dacosta, Albert Adrià, Ángel León and Dani García. You can watch the trailer here (only available in Spanish, but some some pictures are worth a thousand words).